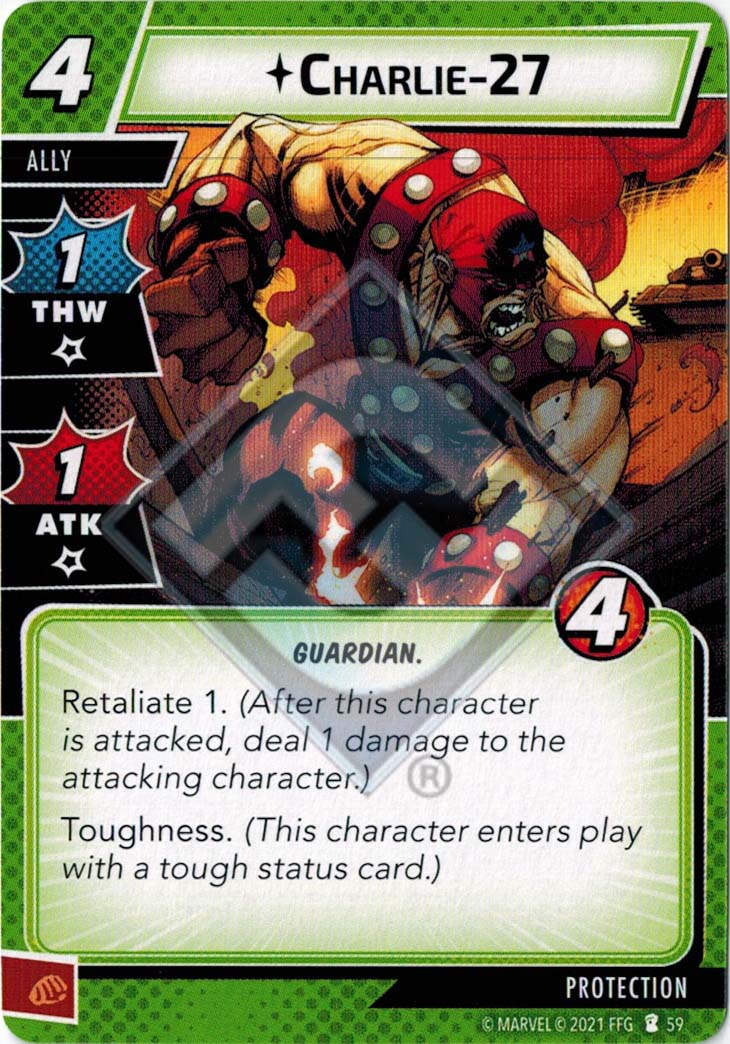 Iron fist does 2 stun+1 last hp block. He does 6 damage over 2 turns

Charlie does 1 block from toughness (can't attack first turn he comes out either)+1 last hp block. Charlie does 3 damage over 3 turns.

So Charlie has 1 fewer block, does 2 less damage over a longer period of time and has more conditions.

Only other best case scenario for Charlie (aside from other card combos) is blocking exactly 1 ATK hits (maybe from small Minions) and returning 1 damage each. Iron fist can't tank 5x 1 ATK hits while still doing 4 damage. 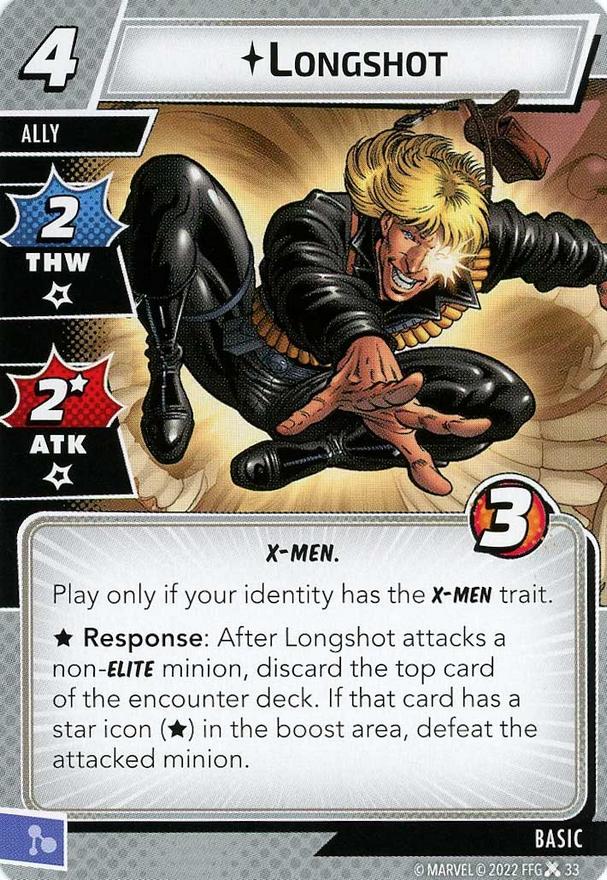 If you aren't getting anything out of the response, it's overcosted by one resource, or maybe a little more. The X-men trait does have synergy value, but you probably need multiple synergy effects to outweigh the amount you're overpaying.

A typical scenario might be around 20% star-boost cards, so if you're blind-firing this, you're going to miss frequently. You may play cards that let you scout and/or rearrange the encounter deck, e.g. Blindfold. Even if you can't find a star-boost to set up a killshot, you may still want to trigger Longshot's response just to move a card out of the way for later.

If you hit with the effect, it could be doing as little as one damage (if you were attacking a 3 HP minion), or as much as 11 or more (Blob with a fresh Homo Superior). I'd say if you can get an effective 3 damage out of the effect, it's overcome the amount you overpaid for it up front to become a reasonable value.

Overall, I think I like it; it's reasonably average if the game is going normally, but has the potential to be massively impactful in the toughest scenarios and ugliest game states, especially if you build in some helper cards. A+ for theme, maybe a B for gameplay? 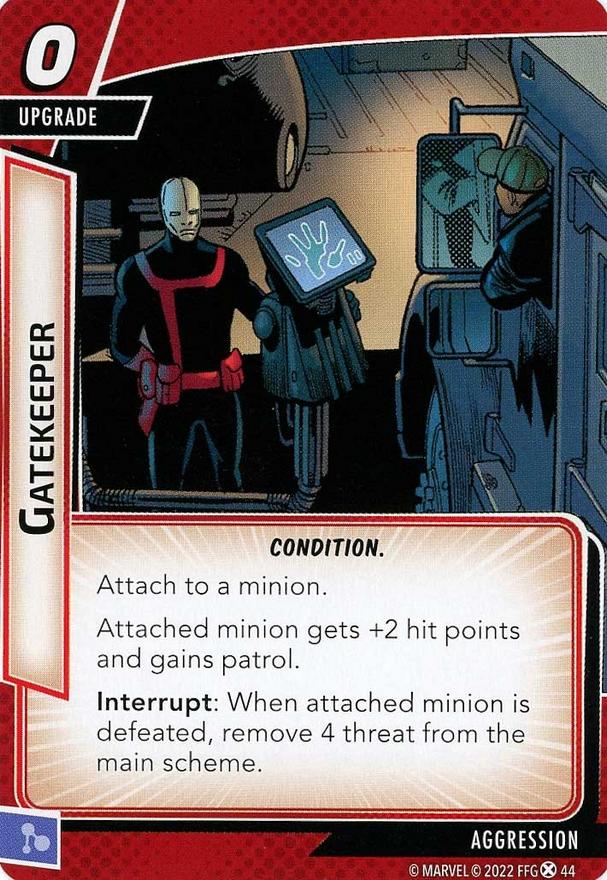 Typically you get a little more damage for the same cost than you do threat clearing. You might get, say, five damage for the same price you'd pay for four threat removed. So you could evaluate the drawback of increased minion HP on Gatekeeper as being equivalent to a reduction in the amount of threat it removes. In total, this card may be worth something like 2.4 threat removed for the cost of the card, which is still pretty good (much better than that there For Justice! certainly).

It is, however a very conditional card: you need there to be a minion, you need to be able to cleanly remove that minion with its newly increased HP, and the threat removal can only go towards the main scheme, so it doesn't help with side schemes and there's the usual issue of "is there going to be that much threat on the main" in solo and "do I even care about main scheme threat / is someone else better at clearing it" in multiplayer.

As a bonus feature, this isn't a Thwart, so it doesn't care whether you're Confused.

Might be best in Cyclops (turns on Optic Blast) or Shadowcat (turns on Acute Control, though that doubles up on the awkwardness about thwarting the main). If only Outta My Way! was a better card! 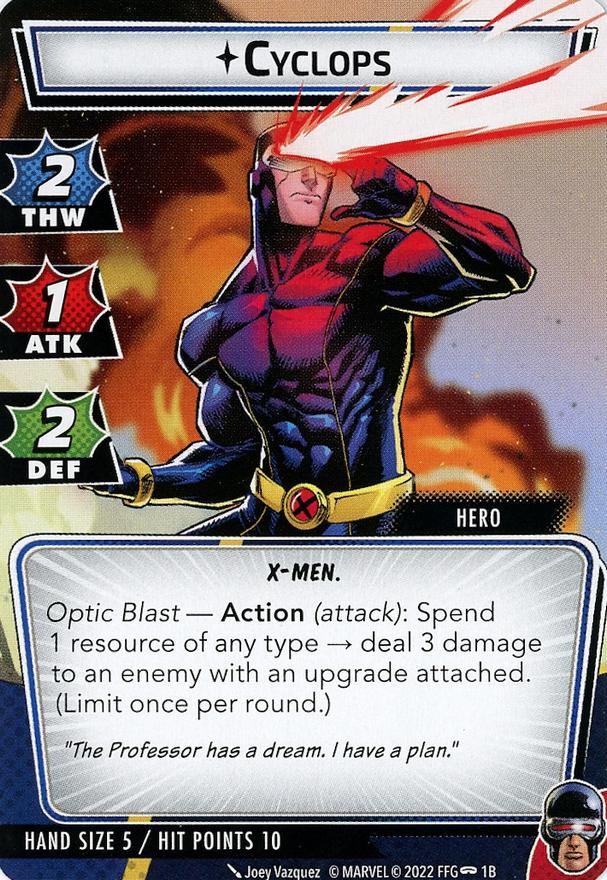 I like the ideas here. Making him a master tactician for the X-Men makes a lot of sense. Unfortunately, between wanting to run tactic cards, but also having access to all X-Men allies pulls him in too many directions. A lot of the good tactic cards like Ready for Action are about sparing a few good allies instead of running like 13 because you have access to so much. And while a true leader, I never saw Cyclops as "everybody's friend". If they ever make a Prof. X, that's where this ability would belong. What I think would have made more sense is either allow him to play Training cards from any aspect (but the Danger Room card kind of wants multiplayer decks to actually work together to use those) OR I would have loved to allow Cyclops to be able to play Team-up cards for others. So if the table has like a Wolverine (hero or ally) and a Colossus (hero or ally), a Cyclops player can play Fastball Special, as if the brilliant tactician recognizes the combos of his teammates and calls for the maneuver. Since already we see 5 different team-up cards for the X-Men alone and they are always basic heroes and even most of their ally versions are basic too, this would have been awesome. But instead we kind of just got a watered down version of Adam Warlock's ability. It'll become more valuable as more X-Men allies get printed, but at the end of the day, if I wanted a bunch of allies, which are unique cards anyways, from various aspects, I'd just play Warlock.

Confusing the villain is worth about two resources on its own, so getting three damage stapled on for just the cost of a card is a nice value. One of the few ways to access Confuse in Aggression, though fairly restricted on which decks can use it due to the trait requirement.