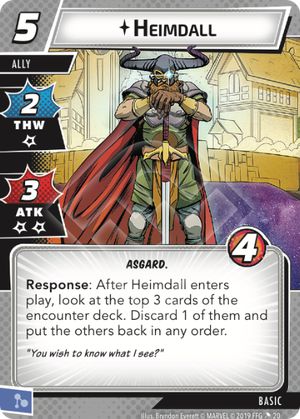 Heimdall is the most expensive non-variable-cost card printed. Most characters will need to dump their entire hand just to play him in alter-ego form, to the exclusion of other cards that turn. Not every hero can afford this luxury, and sometimes when you draw him you simply will need to do something else (especially when under Shadow of the Past or expert mode pressure).

The response is absolutely ridiculous in solo play or duo with a stunned villain, choosing the villain's boost card and your next encounter card, but is much more lukewarm in larger games where it will usually only affect the order of boosts.

However, what we have in this card is probably the first ally that you absolutely do not want to use to defend. His 8 threat thwarted over 4 turns is simply unparalleled in a single card, essentially twice as potent as an empowered For Justice!. Moreover you can decide to use his last point of health to instead throw a Haymaker. The flexibility might not rival Nick Fury, but the longevity certainly does, especially when you consider that this investment is worth supporting with other cards such as the ever- amazing First Aid.

In summary, don't write this card off because it is hard to use effectively. It isn't as flashy as Energy Channel or Shield Toss, but in this game that forces constant decisions about opportunity cost, the payoff can certainly be found here.

The_Wall · 112
it must be said... thanks to his Response it can take out Loki very quickly — Andrea88 · 2 3/22/20
Sadly the upcoming Sentry Card which is also a 2 THW and 3 ATK with 5 HPs only cost 4 points with the detriment of receiving 1 encounter card. Makes Heimdall totally over priced by comparison. Yes the Sentry is Aggression not basic but really any value in Heimdall is even less sustained once Sentry is in the mix. IMO. — CBRAvengerIronMan · 1 6/9/20
I run Heimdall in a Black Panther Leadership deck. Rapid Response and Teamwork help squeeze the extra mileage! — CitizenK2 · 1 8/29/20
@CitizenK2 same here. Panther has the resource curve to justify including Heimdall, and the synergy with Rapid Response is notable. — darkshift07 · 1 8/31/20
2

He looks to have great synergy with the upcoming Star Lord. Star Lord can summon him on the cheap with his ability, and then he can enable Star Lord to use SL's ability and minimize the impact of the resulting encounter card.

tinyraccoon · 3
...except that summoning him on the cheap requires using SL’s ability at interrupt timing, and thus the encounter card has already been dealt by the time Heimdall enters play. — Death by Chocolate · 4 5/7/21