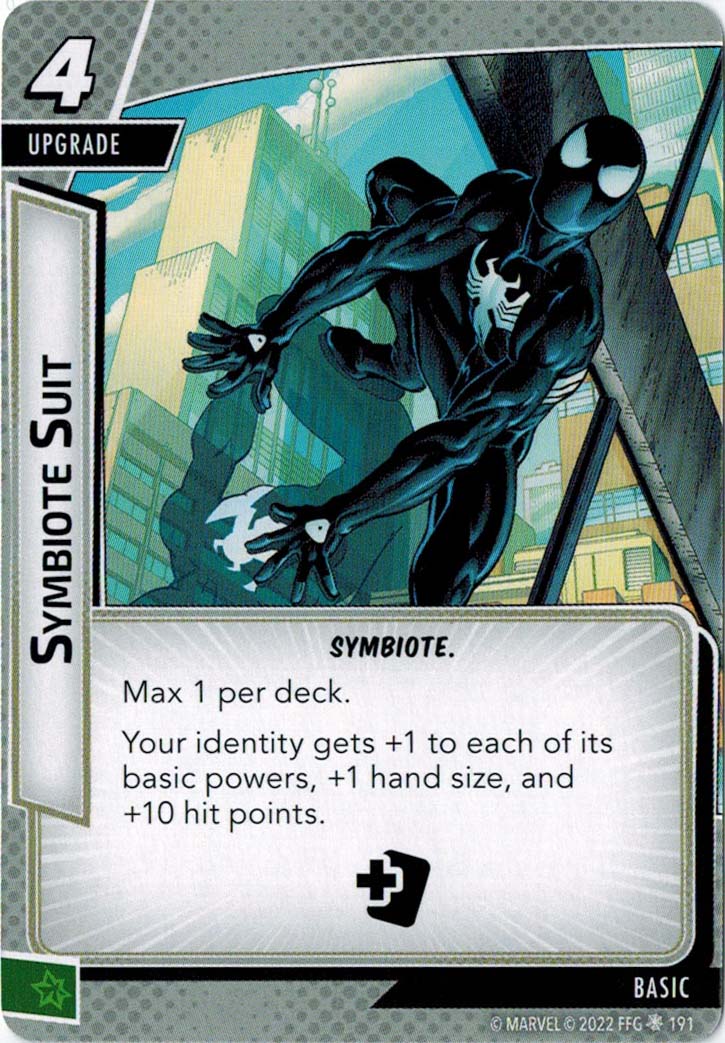 Not a very good card; most decks would be better off with just an Avengers Mansion. As a long term value play, the Suit and the Mansion both provide you with +1 card per turn on a 4+card upgrade/support. For an extra encounter card every turn, you get +1 to basic powers and +10 hit points. Encounter cards vary greatly in their effect, but certainly almost every encounter card is more impactful than something you can clean up with just a single point of ATK or THW. So if you're running this, hopefully you can get 3+ uses of your stats per turn, so it's at least in the ballpark of the damage an encounter card is causing. We're talking multiple readies (Quicksilver, Ghost-Spider), or a deck playing events that total up your stats (Go All Out, Push Ahead). Potentially cute on Adam Warlock (extra ready from Warlock's Cape, and can refill the extra HP with Soul World).

As a short term "close out the game in a hurry" option, it's...ok, I guess? The HP will probably tank two villain hits plus maybe a minion, and you're staying in hero form so maybe you can ignore the main and side schemes and just push damage on the villain with your boosted ATK and +1 hand size. I think most decks would do better with a 2 or 3 cost attack, though, as it'll be about as effective at reducing the villain's HP, while also being a useful play earlier in the game.

Note that it's not "just" an extra encounter card, it's another encounter card that can combo with the other encounter cards already being dealt out. Sure, any random minion is not that big of a threat, but when that player flips over a second card and it's Gang-Up, now they're in real trouble (if not outright defeated).

I think the biggest problem is that Symbiote Suit effectively gets worse as scenarios get harder. When Rhino flips Hard to Keep Down or "I'm Tough", eh, who cares. But pretty much everything in Venom Goblin's deck hurts.

Could be slightly better the more players are in the game, as it's more likely that someone will have AOE damage/thwarting, to clean up the extra messes you're generating at a low cost. Just watch out that the extra encounter cards going around the table don't knock out your friends that don't have the buffer of extra HP.

Fry · 144
Symbiote suit could also be helpful with a star lord deck — XPGamer · 1 8/13/22
I think Star Lord would be a poor choice. He only has three Risky Escape to take advantage of the Suit's bonus stats. Meanwhile, most of the rest of Star Lord's kit doesn't get any benefit from the Suit's extra encounter cards (since they are only dealt out after the villain activates), and with the extra encounter cards Star Lord tends to generate you're even more likely to get "combo" effects from the encounter cards, as discussed in the main review. — Fry · 144 8/14/22
sorry I thought you could combo off of it. For the record you get the card at the villain faze in case anyone was wondering — XPGamer · 1 8/18/22
5

Easily one of the best cards in the game, with a drawback that just barely keeps it balanced. This card can allow Iron Man to draw eight cards a turn , boost Aggression Hulk's STR to 6 or give Protection Hulk a 35 HP and 5 DEF, and turn Quicksilver into an unstoppable one-man army. The extra encounter card can occasionally make things tougher, especially if you spend a lot of time in alter ego, but overall, the 4 cost and extra encounter card are minor inconveniences compared to all the benefits it gives you.

jimbotherisenclown · 6
Iron Man has a maximum hand size of 7, so he actually cannot ever get an 8-card hand size for any reason. This also means that Assess the Situation is useless to him once he has enough tech cards out, even though it uses him on the art and flavor text. — OrionJA · 8 7/27/22
I am so torn on this card. I want to love it but I feel the hazard icon is too high a cost. The resource cost of 4 balances out with the hand size bump (Avengers Mansion), so is the extra +1 to all stats and +10 hit points worth it for an extra encounter card every turn? I am curious to hear people's opinions but I have not had success with this card — Stretch22 · 243 7/27/22
@Stretch22: I have the same feeling. It really depends if you're — neothechosen · 7070 7/27/22
Oops sry for that! It depends if you've got enough setup in play, but also which villain you face (Ronan? Are you sure you want another encounter?). — neothechosen · 7070 7/27/22
Does the extra encounter card always go to the player with the suit in this case? Or as always to the first player? — Vortilion · 122 9/21/22
Brian-V has suggested this card replace Gamora in the Adam Warlock Wild Tutor deck, if Gamora is already being played in multiplayer. — Fandabidozi · 1 1/16/23
1

I think the best heroes this card fit is Wolverine. He can benefit the 10+ hit point to easily pay attack events. Combine with +1 card and +1 attack, he can have insane round. Nevertheless, it's still situational. I don't think i want to play this kind of card at the begining of a game.